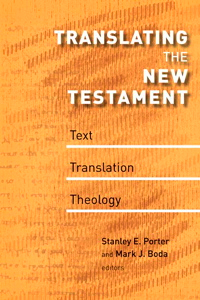 I got this book from the Library the other day, and I’ve read quite a bit of it so far. The textual criticism articles were pretty interesting. Barbara Aland wrote about the work that still remains to be done for the NT. Maurice Robinson offered a critique of the standard critical text, the NA27 (which has been put together by Aland’s organization). He has plenty of good critique for the standard critical text. He loves to point out that the reconstructed text of the NA27 often has a reading that is not supported by any manuscripts (at the verse level). The individual variant have support, but the particular reconstruction of an entire verse does not have support as is from the manuscript witnesses. While I don’t know if this is as big of a problem as Robinson makes it out to be (it is a concern), he doesn’t seem to offer an alternative. I suppose I should go read his book arguing for the textual superiority of the byzantine textform.

Some of the other essays are fascinating. Alain Gignac’s essay on “A Translation That Induces a Reading Experience” especially stands out. I’m not sure I follow everything he says, but his reflections from working on a contemporary “non-traditional” Bible translation were wonderful to read.

More as I get further…