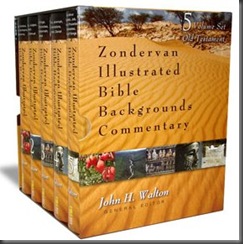 Special thanks to Jesse Hillman at Zondervan for a review copy of this fine volume!

Before I jump in, I should share a little of my own background (insert pun apology here).  I’m nowhere near an Old Testament expert.  I have some decent background knowledge for the New Testament, (at least for an interested layman) but the OT is a different story.  For this reason I jumped at the chance to review an OT commentary, hoping it would help me appreciate the OT more.  While the series’ focus is on historical background, it is a valuable resource that any interested layperson or pastor could put to good use.

Now for the review.  First of all, some specifics are in order.  I received volume 5 which covers the wisdom literature (Job, Psalms, Proverbs, Ecclesiastes, and Song of Songs) and the minor prophets (Hosea – Malachi).  Each book has an introduction, each of which vary in length.  Most are rather extensive, though some books with scant information are shorter (Joel for example).  The introductions give information on dating, context, and the audience of the book.  The contents of the commentary are broken down by section and verse, following the normal format we see in other commentaries.  There is a plethora of end-notes and bibliographic information to further your research if you so desire.  Additionally, there is an introductory essay on comparative studies which was quite helpful to someone who was largely ignorant of the discipline.

There is a lot to like in this series.  What has impressed me most of all is the abundance of extant literature we have from the Ancient Near East.  We have Mesopotamian sources, Egyptian sources, Babylonian sources, Assyrian sources, Akkadian sources, and many others.  There’s a wide range of dates too, going as far back as the second millennium B.C.  All of these texts and records are brought to bear on the Biblical text in the relevant moments.  The volume also has brief articles interspersed throughout on a single topic of note.  Some examples include “Hymnic Doxologies” in Amos and “Divine Sonship” in the Psalms.  These typically go into more detail than the textual notes.

As the name would indicate, there are tons of pictures in this series.  They are very well done.  I’m not a particularly visual person, but even for me they help connect the text in question to its historical context.  There are pictures to be found on nearly every page.  Often they take up half a page, and the quality is up-to-par.  They range from pieces carved in stone (murals?), to pottery and tablets.  Maps are also included at important points.

Even with all the good things going for it, there are a few qualifiers to give the volume.  First, this isn’t a general purpose commentary, nor is it trying to be.  Detailed textual note are completely absent.  Instead, we’re treated to a rich assortment of historical background.  Second, it would be nice to have an article discussing in broad terms the various cultures which are cited in the text.  As an OT neophyte, I have very little basis to compare an Ugaritic citation with say, an Akkadian or Mesopotamian text.  Explaining these civilizations in the introduction would have helped me a great deal as I tried to make sense of the different sources.  At least a brief trace of the rise and fall of the culture in question.

All in all, the Zondervan Illustrated Bible Backgrounds Commentary on the Old Testament is a great series.  This volume has proved very useful recently as I’ve been reading through the Old Testament.  If you’re wanting to gain a richer understanding for the Old Testament, I’d definitely recommend this series.  Comparative studies have too long been ignored by evangelicals (myself included!) but volumes like these stand ready to help us pick the rich fruit that the discipline has left us.