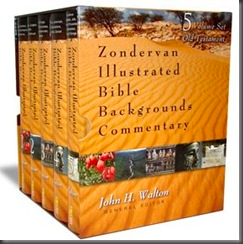 Special thanks to Jesse Hillman at Zondervan for a review copy of this fine volume!

After reviewing the 5th volume of the Zondervan Illustrated Bible Backgrounds Commentary, the folks at Zondervan were kind enough to send me another volume to review. This volume (volume 4) covers the major prophets: Isaiah, Jeremiah, Lamentations, Ezekiel, and Daniel.

Many of the comments I made regarding the fifth volume also apply to the fourth. The work is full of background from the literature of the Ancient Near East (ANE). We have ANE citations by everyone from the Egyptians, to the Babylonians, and Akkadians. The shear amount of literature we have from the ANE is astounding, and the editors put it to good use in elucidating the Biblical texts.

In addition to the normal commentary on individual verses, the volume is full of helpful articles on a given topic. One interesting article I came across in Isaiah was on “Dating Methods.” I’ve always wondered how we were able to get such precise dates for events hundreds of years before Christ. One extraordinarily useful method is astronomy. When ancient chronologies record events in relation to an astronomical event, we can usually calculate an exact date and assign dates with that as a starting point. It makes perfect sense!

Some other articles include, “Substitutionary Rites,” “Utopian Paradise, and, “Siege Ramps.” A very broad spectrum of background material is presented. The introductory articles are also quite detailed and helpful. The introduction to Isaiah offers a brief history of Israel during the 200 years covered by the book. This is vitally important to understanding the text. The introduction to Daniel is very well written. From what I can tell, it handles the issue of genre quite well, giving explanations of the various types of literature contained in Daniel and providing parallels to other ANE works. However, the commentary doesn’t take some suggestions to their full conclusion. The author doesn’t outright state that Daniel may have been written much later than the events portrayed in the text. It is suggested that the author of Daniel may have taken a well known literary medium (crafting history in the form of prophecy) and adapting it to his own means. But it isn’t stated outwardly that perhaps the work was written much later than the events it portrays. The reader is left to make the connection for themselves.

In sum, I heartily recommend these volumes to anyone seeking historical and cultural background knowledge for the world behind the Old Testament. They reveal to us the world into which God spoke his scriptures, and they help us better understand the message of these scriptures we have received. We not only have words, but also hundreds of pictures of artifacts to help the more visually minded place themselves there. There will always be cultural distance between a 21st century reader and the world of the Old Testament, but these works go a long way in bridging that distance. Pastors, students, and scholars (what a bibliography!) alike will find much to love about this series.